Yesterday, my kids were quietly in my room for well over an hour. I was told not to come in because they were working on a surprise for me and Barry. (I was praying they weren't taking scissors to my bedspread!) Finally, they excitedly invited me to enter the "Scary Halloween Room".

Here's my bedroom wall. (Ignore the lack of decor and style.) They worked forever to draw, cut, and tape "scary" pictures and objects (like the ax, haha! that is kind of creepy!)  to the wall. 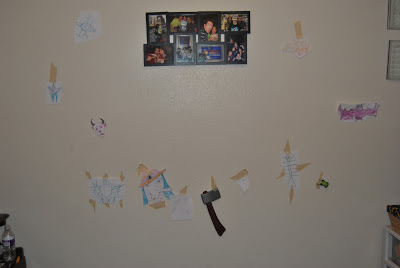 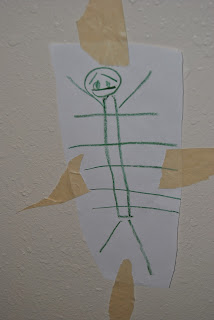 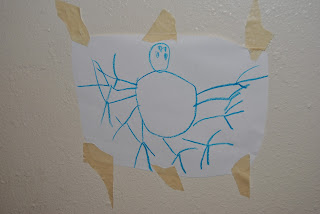 Now here is Jaye's contribution. She is strangely into drawing flags. (random, right?) But here is her Halloween flag, and apparently that is Grayson's face on her flag. There were a few flags taped around my room. Silly girl! 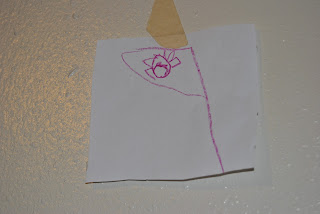 This was the scariest part. Grayson said, "Moooommy, close your door!" And Oh, how I screamed. There was a big scary snake on the door! 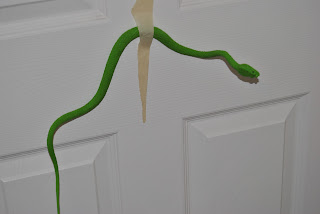 This one's my favorite of the scary Halloween room. It's an "Apple Monster". (He's learning about apples at Pre-school, so I'm assuming that's where the connection came from.) 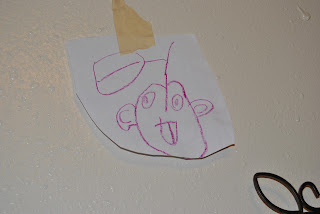 I am so grateful for my creative little kids, and I love my SCARY HALLOWEEN room!

And I am so grateful they used tape this time, instead of Elmer's glue...  like last time.
﻿
Posted by Krystle Ricks at 12:28 PM No comments:

A while ago, Laycee found a doll on Jaye's bed, and adopted it. She has been OBSESSED with dolls ever since. It amazes me that a 14 month old innately knows how to nuture a little baby. She loves to put her baby in a stroller and push her around, she loves to wrap it up in a blanket and snuggle it. I tried to give her an adorable stuffed animal to play with and she kind of squawked at me angrily and then insisted I get her a doll instead.

I think it's so funny. The other day we were at Walmart and Laycee just started freaking out while we were in the toy aisle, so I got her out of the cart to look at stuff. (I'm a brave Mom, I know.) And she went right over to the wall and started whacking this box that she could reach until it finally fell on the floor. Satisfied, she just carried the box around and looked at the twin dollies inside.  Kids definitely come with their own personality, because Jaye could care less about dolls.

Here are a few pictures as proof:


This is Laycee first thing in morning 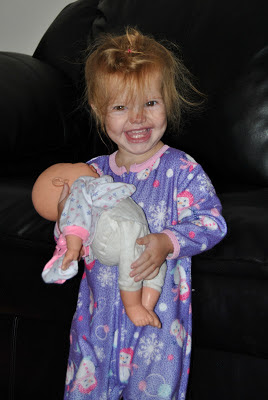 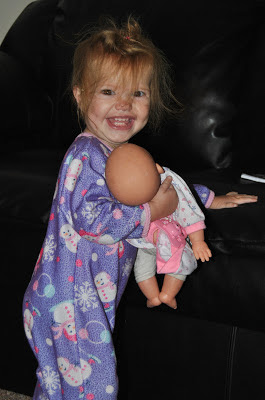 Here she is in the afternoon with her baby. (Did I mention she loves to wear hats and necklaces too?) 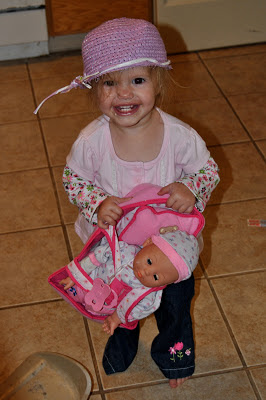 She was quiet forever in her room so we went to check on her, expecting to see marker on the wall or something shocking, but she was just sitting quietly, playing with Jaye's barbies, putting them into the stroller. 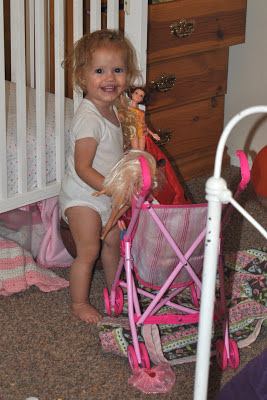 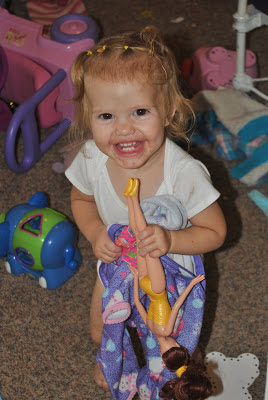 Where has the time gone?! My little JJ has turned THREE!!! So of course it was time to party!!!
Jaye wanted to have a Halloween party, but since it was the beginning of the month, I didn't want to stress out parents by getting a costume in order. So we had a "Halloween Hat party" and invited everyone to wear their crazy hats. In retrospect, it wasn't that great of an idea, because five minutes into the party, no one was wearing their hat anymore. BUT, as my mother taught me, a party has to have a theme, so the Hat idea was it.

So the families arrived and we had a haunted dinner, with a veggie pumpkin tray, Hot dog mummies, and apple monster mouths (not pictured). The kids and I also cut out Halloween shapes in tortillas and made tortilla chips with dip. It turned out pretty yummy!

So then on to the games. (SHOUT OUT TO MY MOM for some fun ideas!) We gave all the kids a sheet of stickers and then had them race to see who could get all their stickers on the other players the fastest. This was a GREAT game for little kids! And for my husband too apparently. 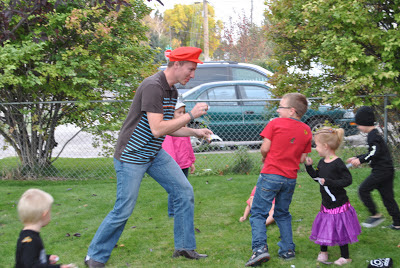 Then we did a Witch race. The kids had to ride their brooms to the line and then throw hoops (glow stick necklaces) over a pumpkin (orange soda with pumpkin faces drawn on). 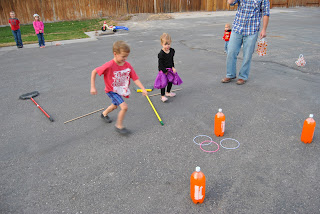 Pinatas are a TRADITION with our family, but I didn't have time to make one, so we played an alternative game I found online. We hung a candy bucket from the basketball hoop and gave each kid a few pieces of candy and then they raced to see who could toss their pieces in the fastest. This turned out to be a great game for little kids too. After everyone got their candy in, we just gave them their goodie bags and dumped out the candy just like a pinata.

NEXT: Presents! Jaye was pretty spoiled by her Mema! But we loved all the gifts given and are so grateful for our friends! (And for all the birthday cards and money from family... THANK YOU!) 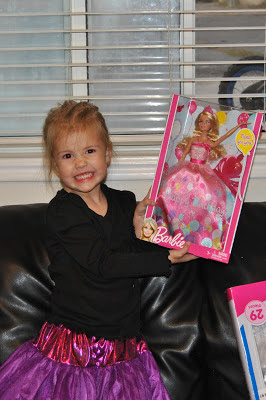 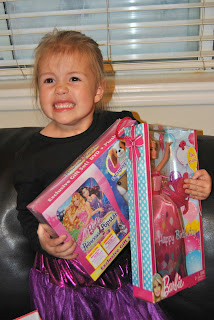 Jaye wanted her cake to say "BOO" instead of "Happy Birthday" 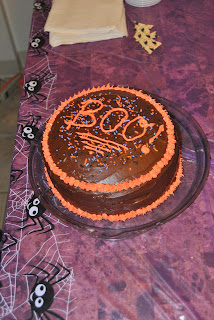 And here's our little three year old after the party. Hatless. I didn't get a single picture of her wearing her tiara. Oh well. It was a Huge Success and so much fun! I'm sad there won't be another birthday party until April. :P 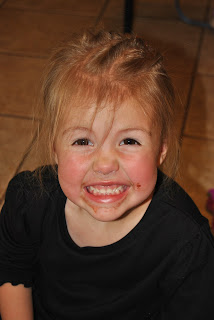 I had company over nearly every day last week. Which, in my book means: AHHH! NO TIME to do laundry! Hide it all in Jaye’s room!


And we did. And we enjoyed all the company that came over to our "clean" house. Then Sunday hit, and Jaye had an accident in her LAST pair of clean panties.

All I could think to do was put her in a pair of Grayson’s. So I did.

I never realized how much Jaye enjoys hoisting up her dress and parading around for the whole world to see. But the whole world, or at least EVERYONE at the church fireside got to see her blue Sponge Bob briefs.

She got a lot of looks. And I felt the need to explain to anyone and everyone that Monday was a BIG laundry day at our house.

I’ve said it before… but maybe someday I’ll know the satisfaction of GOOD homemaking skills.