My children were born in New Mexico where the seasons are Mildly Cold, Warm, Hot, and Sizzlin’. Grayson has a few vague memories of the quickly melting snow, and we had a beautiful white Christmas this past year, but, Jaye has never seen falling snow.

Recently, we were walking home in the crisp Idaho night, and a light snowfall began. Grayson immediately started running around with his tongue sticking out. But Jaye just looked up and squealed, “Bubbles!” She joined Grayson in scurrying around and swiping at the flakes, shouting, “Pop! Pop! Pop!”


I hope she finds these bubbles as magical, when it’s -11 degrees and the wind is whipping.

So, I had this grand dream that I'd be posting more blogs, since I have new and exciting things to talk about. But, I'm busy trying to learn the ropes of this new life. I'm really grateful that almost anywhere I need to go in town is on two main roads from my house. It takes less than two minutes to get to church (We may actually be on time, from here on out!), and the stake center is right down the street. It's awesome! Barry bought this poor student discount card, and we have been using that to eat out at all the fun places in town.

People keep asking me how I handle moving from the house we owned to an apartment. Honestly, not a single complaint here! We have a dishwasher!!! And we have the washer and dryer IN our house! No more walking out to the creepy, black-widow infested, garage! And it's three bedrooms so I'm currently working on cute-ing up my girls' room! And Grayson loves having his own room. Almost every day he says, "I love our new small house!"

I'm so grateful for all of our blessings!

But what I really wanted to blog about today, is this past Monday's Family Home Evening. My son is CONSTANTLY (I grit my teeth when I say that), asking me and Barry to play "Beyblades" with him. It's these metal tops (based off a t.v. show which he also loves), that you put on this device, pull a rip cord, and launch them into this little plastic stadium so they can "battle".

I was in charge of F.H.E. this week, so I found the perfect story from the Book of Mormon about Captain Moroni leading soldiers to war, and how they prayed for protection. So I read the story which talks about a specific battle, then talked about how important it is to pray during our own "battles", and then discussed what those might be.

And then I announced that we had ten minutes to go find a battle costume and come back for a Beyblade battle tournament. I'm so grateful I have an awesome husband, who was just as surprised as the kids by my announcement, but (ALMOST) just as willing to participate.

So when everyone came back with costumes donned, we did a battle top draft. And then we did a search for battle music on Youtube, and then had the GREATEST BATTLE TOURNAMENT in the World while the battle music played!!! 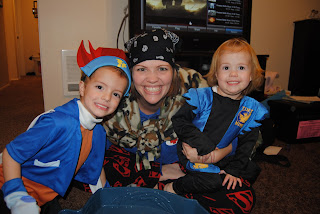 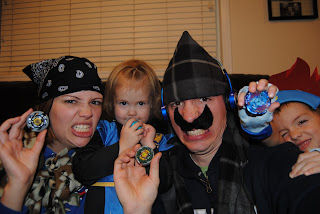 ﻿It was fun. And I learned you can relate anything to the Gospel :-D
Posted by Krystle Ricks at 12:55 PM 2 comments:

So, today was an adventure. At the moment, Barry’s scooter is in need of a new battery so he has been taking our van to school. But, I’m not one of those home-bodies; I like to go out. So, today I decided I would drive him to school. So, today was my FIRST time driving in Rexburg! And I seriously felt like I was in a video game! There were students popping out of nowhere, all over the place! They just launched themselves into the street, and I had to dodge them like those giant cannon bullets in Mario!

It made me realize just how “small-town” I am. I’ve never lived close to a real university, and the only time I’ve been on a university campus was as a teenager for EFY (Especially for Youth Camp) at BYU-Provo. So, this is a crazy, surreal experience seeing ALL these people. After we dropped Barry off, Grayson asked me, concerned- “Mommy, why is everyone walking?”


We’re just not used to this! And I don’t know how Barry can say this, since he’s from Utah where there are a billion colleges, but he’s never been to a college campus during an active semester, so this is quite an adventure for our whole family. I feel like we live in an ant farm… everyone is just walking. ALL the time. EVERYWHERE.


But the best part of the day, was about five minutes after we were all in the car, on the way to drop Barry off, we realized I had grabbed the car keys that just happened not to have a house key on it. GREAT. So we called the Manager.


We decided Barry would just call me when he got out of school, and then I realized I didn’t have my phone. (On my first day out alone! Grrrrreat.)


So, for five hours I had to keep the kids entertained. This meant a highly nerve-grating trip to find a jacket at the Deseret Industries Thrift store, where the kids thought it was hilarious to climb out under the dressing room door and hide while I was changing, and Laycee’s incessant screaming (she never screams), because she pooped. And, of course, I left all the diaper stuff out in the car. Then, after using my extra-great parenting skills of bribing my kids to behave with ice cream, we spent an hour-and-a-half at McDonald’s, where I didn’t have a phone to text or talk to anybody, and the only other person in the play place didn’t speak English.


Then after dodging bullets again to pick up Barry, we drove to our manager’s house (who finally answered the phone), to pick up the spare key. It was dark. It was cold. And the key didn’t work.


The kids and I piled back into the car while Barry did the guy thing of trying the same not-working key, but hoping for a different result. But then, my smarter-than-the-average bear thought to pull out his Maverick Gas Card and jimmy the lock. And we finally made it inside.


I feel so safe knowing that the contents of our entire lives open to a thin piece of plastic. And now that knowledge is posted online for everyone and anyone to read. :P

So, Barry and I had officially decided to stay in Carlsbad, NM for good. We made all these plans, Barry was going to work at the mines, and teach Martial arts on the side, and I was going to start working at developing a local children’s theatre. With these plans, we got under contract to buy a bigger house for our growing family. We tried to sell our house on two separate occasions. Everything kept falling through, to the point we realized that this probably wasn’t the right path for us.

And then my dad lost his job. As my parents searched for job opportunities, they kept joking that we should just up and move with them. At first we joked about the idea of moving with my family, but this lead to some serious conversations about where our lives were headed. After a lot of discussion and prayer, we decided that Barry really didn’t want to stay at the mines, because of its horrible environment. Secretly, we applied to New Mexico State University and got in. Then we decided, if we are going to be completely insane and uproot our family to go back to school, we might as well go somewhere we want to be! So we applied to a bunch of schools up north.


When we got the acceptance e-mail from BYU-Idaho, it just felt so right. We finally announced our plans to my family… who were way excited and supportive. (When I expected them to freak out and worry.) And then for a third time, we put our house up for sale in November.


Our realtor told us that November and December were dead months for sales, and warned us we probably wouldn’t sell our house until after the year was over. But within two weeks, our house was under contract, to everyone’s GREAT surprise! BAM! We sold our house!


Through the advice of a friend (THANKS CAMBREE!), we got on the BYU-I bulletin board to look for apartments. We were set to get a two bedroom apartment because three bedrooms were WAY out of our price range. But we found a couple trying to sell their contract to a CHEAP three room apartment. We emailed the manager and she told us that someone had already taken that contract but there would be another apartment available and she put our name down for it. BAM, by chance, we landed an even bigger apartment than we were planning!


We decided to sell our second car, thinking we would just leave it in a parking lot (where everyone sells their cars), and if someone was interested, we would have my parents handle the transaction for us. Barry mentioned it at work and right off the bat, someone offered to buy it right away in cash! BAM! We sold our car!


I had to have some serious emergency dental work done, and Barry and I were so distraught because all the money we had saved up for the expensive move was going to have to go toward the dentistry, but through a HUGE AMAZING BLESSING, I ended up not having to pay a cent for the work. BAM! We still had money!


EVERY SINGLE LITTLE DETAIL FELL INTO PLACE. We know without a shadow of a doubt, that this is exactly where we are supposed to be going and what we are supposed to be doing. Outside of our family and most of our friends, people have been so skeptical and judgmental of our choice to go back to school.


We’ve heard it all.


“Why can’t he just do online school?”


“You are going to hate being poor, it’s going to be so hard on your marriage.”


“I can’t believe you are doing this with three children!”


But I just smile at them and let them think what they think. Don't get me wrong, I know this is going to be hard. But never in my life, have I felt so loved by my Father in Heaven, and I’ve never felt his guiding hand so strongly. And I am also extremely proud of my husband. Almost every man he worked with at the Potash mine told him that they hated their job, but when he asked why they stay, they always sigh and say “the money’s too good.”


I’m so proud that my husband will never be one of those middle-aged men who sighs and looks back at what could have been. What a brave studmuffin I married!