This past weekend our family had a blast at the Legacy Flight Museum's FREE pancake breakfast and airplane exhibit. First off, for being free, I was thoroughly impressed with the breakfast. They served not only pancakes, but sliced ham, hash browns, and orange juice. I must be small town, because that breakfast was awesome! 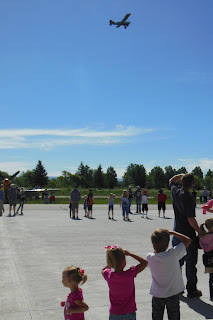 Following breakfast, we walked around the museum portion. My kids (especially Grayson) absolutely loved all the guns mounted on the walls. Then we checked out all the airplanes on display. The cool thing about this museum is that all the planes are in working order, and we see them flying over Rexburg nearly every day.

I have to admit, my Dad would be so disappointed in me because I didn't learn the history of any of the airplanes... I just liked looking at them. 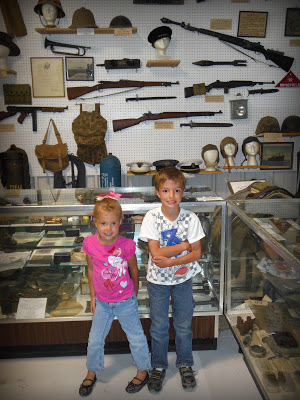 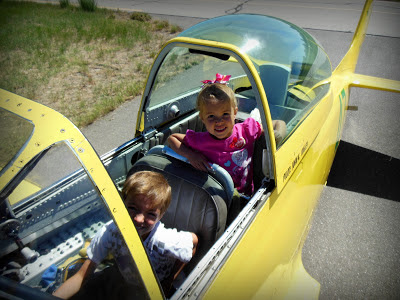 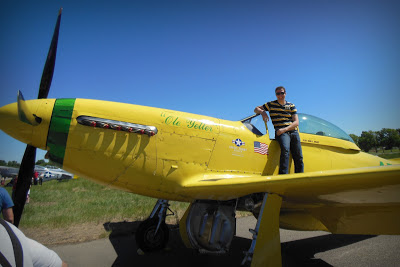 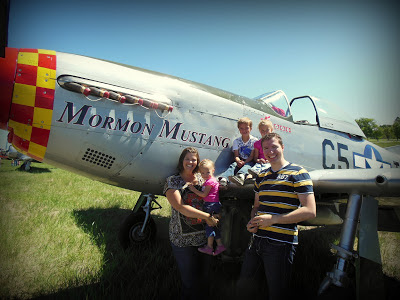 Naturally, we had to get our family pic in front of the "Mormon Mustang". Apparently, this was a famous WWII bomber that shot down three Nazi planes. Here is the link to a cute Mormon Message about the plane. 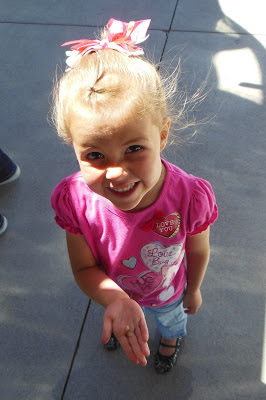 I love this picture! In a previous post, I talked about how much Jaye loves bugs. Well, her other passion is rocks. In this picture she is showing me her "pretty rocks" which I needed to carefully hold while she climbed inside an airplane. 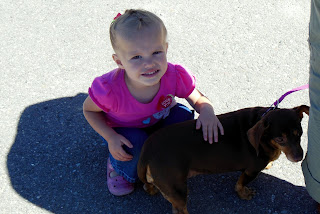 Jaye was obsessed with the rocks, but Laycee really only cared about all the dogs. The planes were only exciting to her in the sky. The grounded planes were about as interesting to her as math is to me. But the dogs... oh, the dogs. She was in heaven! In this picture, she is lovin' on a "Chi-Weenie".


There was one really big airplane that allowed (or at least we assume we were allowed because the door was open, but no people were around) to climb in to the cockpit. 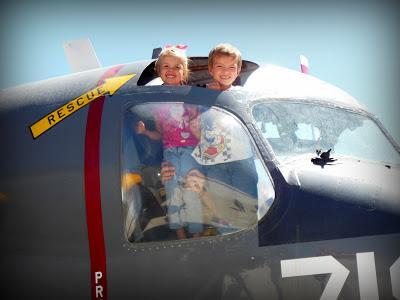 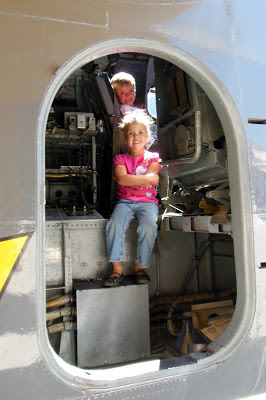 We had a great FREE day together.

Posted by Krystle Ricks at 6:40 PM No comments:

I just happened to see online that the "Art Guild of Eastern Idaho" was hosting a FREE summer art camp for kids of all ages. Naturally, I jumped on that! So, for one hour, three days in a row, we walked down the street to the art guild for camp. They even let Laycee do it. Since it was free, I was expecting it to be really lame, but it turned out so fun!

On the first day, they did texture painting. They had a textured 5x7 wooden block that each kid colored with  pastels and then painted over with turpentine- which blended everything together.

The second day they learned about all the different types of lines- straight, zig zag, etc. Then they spent the hour drawing a picture with a line-drawing challenge.

The third day was the messiest day of all, they even provided shirts for everyone to wear. The kids made "sand sculptures".

My kids had a blast! And I especially loved the price of the camp! 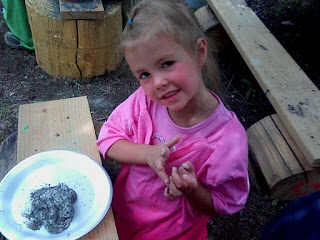 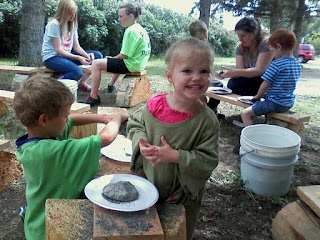 Posted by Krystle Ricks at 5:48 PM No comments:

Barry and Grayson got to go to the annual Father and Son's camp out, and Jaye was so disappointed she wasn't allowed to go so I promised it was going to be a Girl's Night to remember. Friday morning I was helping run the Young Women's annual fundraiser yard sale, so Barry took the kids to the grocery store to pick out a treat for the night.

After the boys left, Jaye's friend came over for some girly fun. We kicked off the night by decorating tiaras. (I just happened to find two left from Jaye's second birthday party in my craft box!) Laycee got to decorate a paper one I printed from the internet, but all the girls had fun doing stickers. Afterward, we made "princess necklaces" and then painted nails. After they were all done, they raided Jaye's costume box and pranced around like princesses. 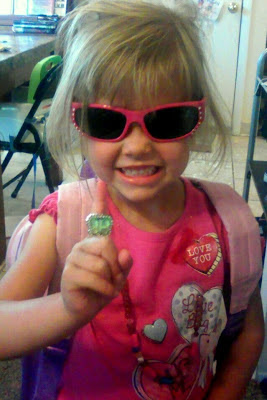 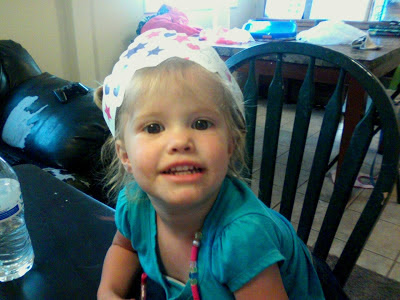 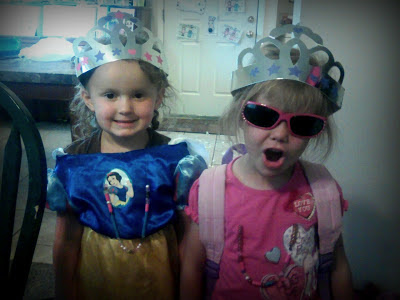 After Jaye's friend left, we put Laycee to bed, got in P.J.s, pulled out our candy, and crawled into Mommy's bed for a late night movie: Snow White. Jaye has never seen it so her reactions were adorable!

Such a fun night, my boys need to go camping more often!
Posted by Krystle Ricks at 3:44 PM No comments:

You have no idea how ridiculously true this statement is! This little girl is OBSESSED with catching bugs and wants to keep them all. It doesn't even matter what kind of bug it is, but her most favorite are lady bugs... and worms.

The other day we went to the park. Normal kids would just play on the play ground. But not the Ricks' kids! They're a unique bunch. First off, they were excited beyond belief to have found two big June Bug Beetles in the bathrooms, and brought those out to play with. Then they used their expert bug-tracking skills to a small exposed bit of dirt under the slide and dug for worms.

When I told them it was time to go, Jaye begged me to let her take her handful of worms home. After I laid down the final "NO!" she started to cry. In compromise, I said, "how about we take a picture of your worms so you can always remember them."

And here it is... In Memory of Jaye's Worms: 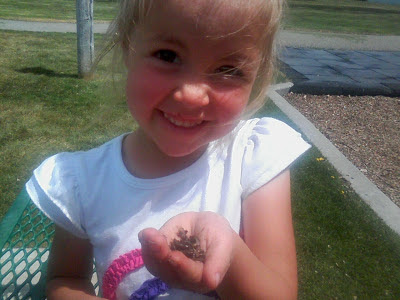 Posted by Krystle Ricks at 3:25 PM No comments:

No visit to Willy Wonka and the Chocolate Factory for me... :(

My mom keeps asking me if I'm showing yet, because I've kind of just looked fat for most of this pregnancy... so here is a picture of me at exactly 30 weeks. And good job to my five-year-old who took the picture for me. Little over a week ago, I found out I have gestational diabetes. It was a huge surprise for me who has had incredibly healthy pregnancies the last three in a row. After talking with the dietician, I felt so overwhelmed that I cried pretty much for the rest of the day.

That. Was. An. Interesting. Day.

(Thanks to my sister-in-law Rachel who is the greatest motivational texter in the world! She talked me through a bad day.)

It wasn't emotional for me because of the actual diagnosis, but honestly, the stress of having to keep a log book and eat and check my blood at scheduled times every day. If you know me... I am NOT an organized person! So the thought of needing to be organized or risk harming my unborn child is a pretty big trial for me.

Fortunately, so far... it hasn't been too bad. My kids LOVE watching me poke my finger. Apparently the sight of blood never gets old for small children- I should take that little poker with me on trips or to restaurants and just prick myself when they get rowdy! It would keep them entertained. Genius.

Anyway, I have struggled with writing down every little darned thing I eat, but I met with the dietician yesterday and she said my sugar levels look great and that I'm doing a great job. The diet hasn't been too bad either. It has actually helped me feel a little bit better.

So, although I have this little trial to bear for a few more months, I am so grateful. It could be a WHOLE lot worse!

But prayers are still welcome :)
Posted by Krystle Ricks at 6:59 PM 2 comments:

Family Home Evening isn't always an uplifting experience at our house. It's usually more of a, "Hurry up and finish your cookie so we can put you in bed because we're really tired," kind of ordeal. But these last few weeks will be chalked as a win for the Ricks Family. Barry was in charge and decided to teach the kids about Ephesians 6:11-18- the Whole Armor of God.
I found some cartoon body pictures online and fake-photo-shopped the kids' heads onto them. So each week, we focused on a different piece of armor. After we read the scripture about the piece, we talked about what it meant, and then the kids got to color that piece of armor and glue it to their body pic.
They all LOVED the activity and I've been surprised how well they remember the title of each piece of the armor. We finished our Armor FHE segment by watching the seminary video on Youtube called, "The Armor of God." It's for teenagers, but my kids loved it. And now after a whole month of making these little warrior pictures, I love seeing the final product displayed on our "Art door."
THE FINISHED MASTERPIECES: 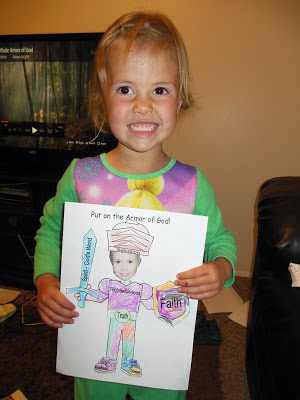 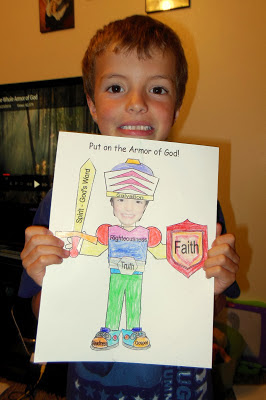 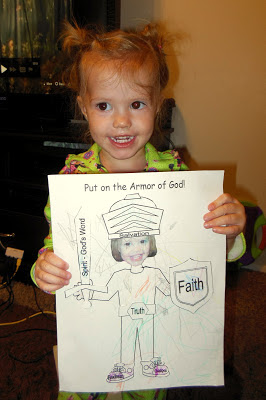 Love in the bathroom

My husband recently started his internship at a company in Idaho Falls. His work group call themselves "The Avengers", so I used the very last bit of my own personal precious birthday money to buy a little "Avengers" knick knack for Barry to keep on his desk at work. About 20 minutes before my husband got home from work that day, my son accidentally bumped the knick knack off the kitchen table and it broke. Before Barry ever got to see it.
Blame it on being tired, poor, or the usual excuse- pregnancy hormones... but I just burst into tears. It was a really big deal for me to spend money on something so frivolous while we are in between semesters (AKA extreeeeemely poor), so needless to say, I was beyond consoling.
Grayson kept trying to apologize, but I just really didn't want to be forgiving at the moment, so instead, I locked myself in the bathroom to cool off. I had been in there for just a few minutes when all of the sudden something was gently pushed under the door.
This sweet drawing: ﻿ 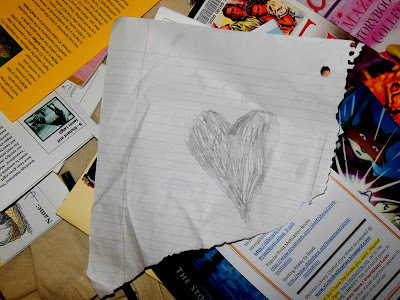 He was letting me know that he loved me. And then I reeeeally felt like a horrible mom. That my kid was so worried I was mad at him, that he needed to send me a message of love. So I cried some more... out of guilt. But then I got out of the bathroom and hugged my sweet thoughtful son, and let him know that I loved him like crazy. And suddenly, the dumb Avengers knick knack didn't matter anymore.


(I should just start handing out hand-drawn heart drawings to everyone... it really can fix a bad time.)