Tonight was fabulous! After hurling my guts out and breaking the blood vessels in my face from doing so, Barry and I ended having ice cream and popcorn for dinner! I didn't really feel like eating real food, and of course Barry wasn't complaining, so we busted out our individual cartons of Ben and Jerry's "Everything but the..." If you haven't tried it... You just haven't lived. Vanilla and chocolate icecream with heath bar chunks, peanut butter cups, white chocolate chunks, and chocolate covered almonds... heaven in a pint. ANYWAY, so we ate "dinner" while snuggling up on the couch watching a cheesy romance movie. It felt like we were dating again... minus being pregnant! So fun. I married the perfect man... for me, at least.
Posted by Krystle Ricks at 10:13 PM 4 comments:

Life is so boring right now. Hardly anyone has posted a blog in a while, so I'm wondering maybe February is just a slow month for everyone. You people need to start writing more because I need something to read! These last few weeks have been rough. I am so incredibly un-busy right now, I am going crazy! But it's not like I can leave the house, because walking too much induces the "up-chuck" effect.
But besides a mysterious rash in a place I can't mention, Grayson is healed from all other ailments (ABOUT TIME!). I'm slightly worried because the staph infection left little scars under his eye... I just hope they go away as he gets bigger. BUT, now that's he's feeling better, he's back to entertaining himself. "Who needs Mommy when I've got my car to scoot around the house?" So with a healthy boy, and a busy-with-work-and-school husband, I'm stuck sitting on the couch twiddling my thumbs. Yesterday, I sat and watched like a three-hour version of "Anne of Green Gables" while Grayson played around my feet. I've practically lived on the couch, and I am getting soooooooo sick of it!

Couch Potato Me is not only affecting me, but everyone. My lack of living has created the most boring conversations. When Barry gets home from school all I have to talk about is Grayson (which of course will never get old) and whatever news I dug up on the internet. Because I have been bored, I've become a boring person. YIKES! I've got to get out, get some fresh air... go to Walmart!

As a side note, I never mentioned Valentine's Day. Like I said, Barry has been extremely busy. He told me he was worried that he wouldn't be able to get me anything for V-Day because of that fact, so jokingly I told him he'd just have to pick another day to be my special day. So Valentine's rolls around and my parents LOVINGLY agreed to watch Grayson so Barry and I could make the hour drive up to Roswell. We got to have dinner at a restaurant that WASN'T Chili's (the only good restaurant in our town) and we got to go to an actually nice movie theatre where you didn't have to squint your eyes because the screen was blurry and covered in tears and spit wads. It was a perfect day.

The Monday after comes and Barry is late for lunch... an unusual happenstance. So he walks in the door carrying a huge bouquet of bright happy flowers, a pack of snickers bars (my favorite) and a receipt to a movie I wanted which he purchased online. I opened the card and he had crossed out the "Happy Valentine's Day" and wrote above it, "Happy I love Krystle Day!" So he gave me my special day after all! My husband is so thoughtful. I love him so much!!!
Posted by Krystle Ricks at 12:03 PM 5 comments:

Very recently, I have learned something about myself. I just do not learn from my mistakes. On Valentine's Day I baked like four or five dozen cookies. I had some friends and their little kids come over to decorate cookies. But as I was baking, I did something. Over and over and over. I melted my eyelashes! More specifically, the mascara on my eyelashes. After EVERY SINGLE batch of cookies beeped, I would open the door, lean into it to check the coloring... and every time a waft of heat would melt my face! I realize that I do this whenever I use my oven, be it casserole or dessert! Which mean I go through a great deal of my life with five giant eyelashes, because all of them have melted into this giant tarantala look! I'm telling you this, because some day I am going to go blind. And when you hear this news, you can shake your head at me and say, "She never learned..."
Posted by Krystle Ricks at 9:37 AM 4 comments:

This is how it works..... The first 3 people to leave a comment on this post will receive a hand made gift from me during this year. When and what will be a surprise. BUT, in order for you to receive the gift you need to leave a comment on my blog and you have to post this on your blog. (That means that sometime during this year you will send a gift to 3 people as well.) Get it? So, the first 3 people to comment on this post will be the lucky ones!

I was shuffling around the house, trying to get ready to pick Daddy up from work. Grayson was quiet so I went looking for him. I found him laying on his tummy in the kitchen, his favorite dinosaur in hand, and what was he doing? He was shoving a medicine dropper in the dinosaur's mouth. I'd say that's a good sign that it's time to stop getting sick!
Posted by Krystle Ricks at 7:13 PM 2 comments:

We all got the stomach flu.
Posted by Krystle Ricks at 9:17 AM 3 comments:

I guess this is the season for Ricks icks! We just finished off Grayson's antiobiotics and for two whole days he was happy and well and things were good and life was normal and the house was clean and Mommy was happy and then BAM! Grayson woke up on Monday morning with this weird red spot on his eyelid. Later on in the day I noticed another little red dot appearing next to the first one on his eyelid. two days later, two more bumps appeared underneath his eye. Today, Grayson got out of bed and I noticed there was a third bump under his eye equaling five. And now, all the bumps looked kind of "juicy" and scabby. I had been thinking this might be Pink Eye all week but after today I knew it was something else. Barry and took him to the doctor and sure enough: Our son has a Staph Infection and a Sty (Inflammation of one or more sebaceous glands of an eyelid, I looked it up). THANKFULLY, it's not contagious but now I'm starting to wonder where in the world Grayson is getting all of this stuff!
Well, for the strong stomached, here is picture for all you Moms. Now if your child gets it you'll know what it looks like! (It looks worse in person but this is the best photo I could get) 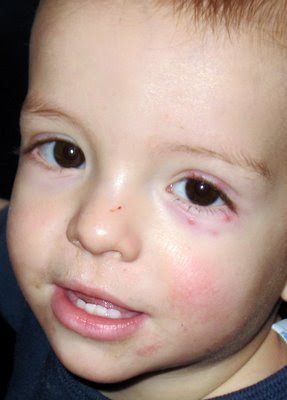 The saddest part is that my Mom refused to take him to my Dad's office today because
no one at his work has seen his grandson yet, but Grayson wasn't "Cute enough to show off" hahahahaha! Isn't that terrible! (Don't judge her, haha)
Posted by Krystle Ricks at 6:24 PM 5 comments:

~Today was great! Apparently, Denny's did a "Feed America" thing where from the morning until two p.m. they were giving everyone a free grand slam breakfast. Barry called me around 10:30 and said, "Be dressed by 11:30 (his lunch hour) We are goin' out!" So we went with his co-worker and spouse to free lunch! How awesome is that!

~The Superbowl was awesome. We once again went to Maryanne Williamson's (my second mother) to watch the game on her big screen. The food was better than the game if I may say so, and the company was even better! GREAT GAME STEELERS! (the pic is my football cake) 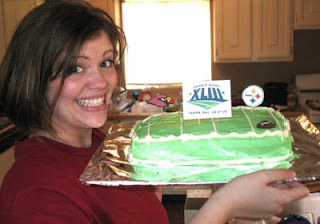 ~Saturday was also Awesome! We've been having a difficult time making time for friends with the move and school and everything but we finally had a game night with our friends the Kiltons! We played this new game calle Rigamarole and it is the most intimidating board game I have ever played! We also made new friends at the party! THANKS CHRISTINA AND DAVE!!! Oh and I LOVED your dessert!

~Grayson is finally feeling better!!!!!!! YAY!!! I kind of miss him sleeping all day, haha! I forgot just how energetic he is! But now that he is feeling better I noticed a weird pink mark on his eye and I'm worried he might be getting pink eye! PLEASE PRAY THAT THAT'S NOT THE CASE!!!

Well that sums up my week! Sorry it was so choppy! After not having the internet for two months, it's hard getting back into the swing of blogging!
Posted by Krystle Ricks at 1:47 PM 2 comments: