A while ago, I mentioned to someone that I wanted to get Grayson a Happy Saint Patty's day shirt and the person informed me that I was not Irish, therefore should not celebrate the Holiday! That's just absurd! I have always decked out in full-green attire for the day so as not to get pinched (Why that is the tradition... anyone know?). And ever since I can remember, my parents made Brinner (Breakfast for dinner) for the Holiday and dyed everything Green. And I mean everything. Green Eggs and pancakes all the way down to green milk. Green milk is actually very hard to swallow, it just seems so wrong.

This is a tradition I have wanted to pass on to my family, but Tuesdays just happen to be Barry's early class. On Tuesdays, I pick him up from work at five, we hurry home so he can change, and then he's off to a 5:30 class. I wanted to make Brinner, but that's a timely meal, and I didn't want to wait till he got home from class because Grayson would be asleep so I decided to go with sandwiches. GREEN chicken salad sandwiches. It looked so gross... almost worse than green milk. But I served it all on green dinnerware and we drank green Koolaid and had green jello for dessert. It was fun. But seeing green chicken may not be the best thing for a pregnant person... ICK. I love Holidays!
Posted by Krystle Ricks at 9:06 AM 3 comments:

After reading certain comments, I need to apologize. I guess I never made an official announcement to my blogging friends... For those of you who are confused about my last few blogs: I am pregnant! My first doctor's appointment is this Friday (ABOUT TIME!) but without the official sonogram, I am due October 16th. That might change after Friday! So right now, I am about eight weeks along, and this pregnancy is a billion times easier than the last one. There's no screaming at Barry to pull over so I can decorate some random parking lot with my recycled lunch (or breakfast, or dinner), there's no awfulness at all! I just have to dive for the garbage can as soon as I wake up in the morning and if I eat right afterward, I'm great... until I start feeling hungry again. The only thing that's been rough is I feel incredibly lethargic. Like, Mono lethargic. I'm active for maybe an hour (active can be anything from sitting and playing ball with Grayson to real active) and then I have to fight to stay awake for the rest of the day. I have to take a nap every single day when Grayson does, and even though all other women who have suffered through what I'm going through support taking naps, I feel so lazy. Soooooooooooooooooo Lazy. So that's where I am right now. Oh and for all those who are wondering, this one was 1oo% planned as well! And I don't care what I'm having, as long as it is male or female! haha! So there you go.... IT'S OFFICIAL!
Posted by Krystle Ricks at 6:48 PM 4 comments:

Masculinity at its best

From the day he was born, Grayson was one hundred percent ALL boy. He already knows how to "shoot" toy guns, make car noises when he plays with hot wheels, and grunt when he fights with action figures. He loves football, basketball, hitting us with his fake sword and light saber, and sit in the driver's seat and twist the steering wheel while making car sounds. I never even had a single person mistake him for a girl (except once when I put him in a yellow, polkadot outfit... never again). There is just one little thing that my tough guy does that just doesn't fit: 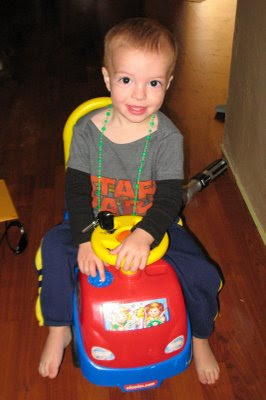 He loves that silly green bead necklace. From the day he found it, he's loved it. He puts it on and wears it for hours at a time... even while grunting and fighting with action figures. We call it "Bling" because for some reason, that just makes it sound more manly. Or maybe just more gangster. Anyway, I haven't let him wear his "bling" out in public yet... but I'm sure I'll be forced to let him some day. Or maybe I'll go buy him a big gold chain with a diamond money sign... That's a little tougher than beads.
Posted by Krystle Ricks at 9:30 PM 4 comments: